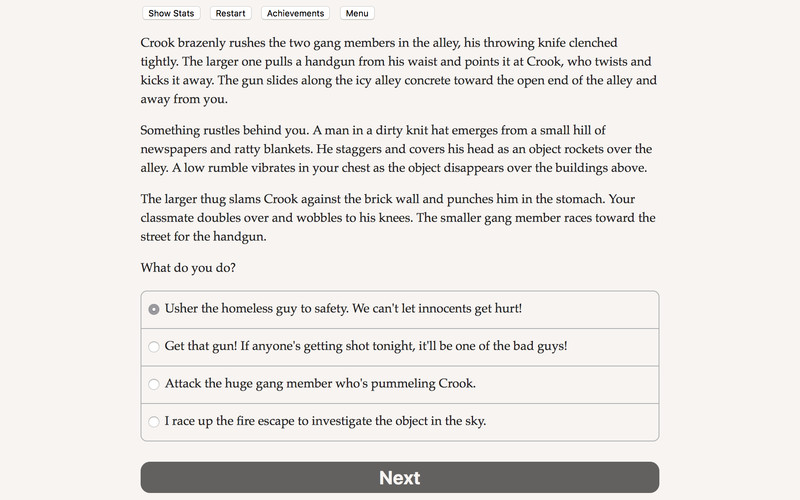 You survived the fall semester, but things are heating up this winter in Speck, Nebraska! A new villain with mysterious motives emerges to terrorize your city! New professors push you and your classmates harder than ever before! New information is revealed about Zenith-training schools in New York and San Francisco! And if that’s not enough, one of the world’s deadliest villains has promised to return before the end of the semester to finish what she started in the fall!

Community College Hero 2: Knowledge is Power is a superpowered 200,000 word interactive novel by Eric Moser, where your choices control the story. It's entirely text-based—without graphics or sound effects—and fueled by the vast, unstoppable power of your imagination. 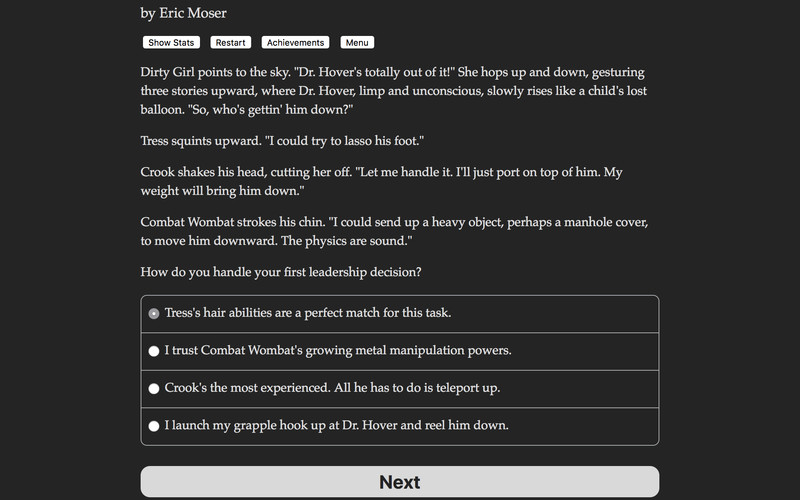 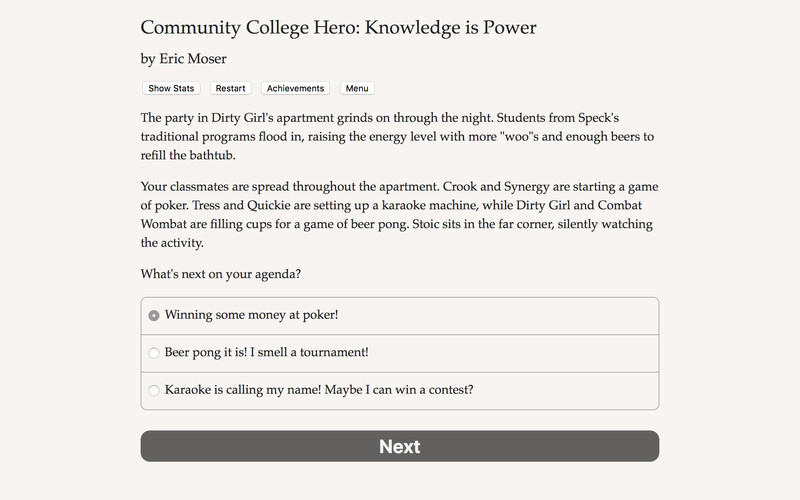 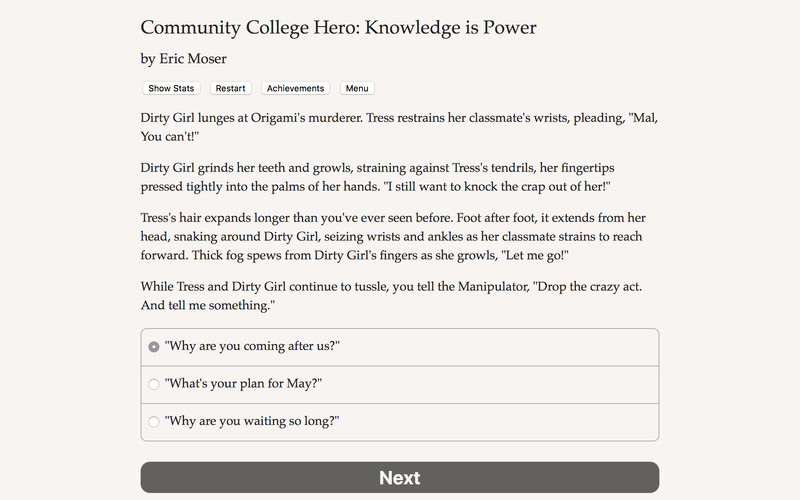 
The power of Hedonist compels you.. One of those "If you loved the first one, you'll love this one" type of recommendations.

The stakes are higher and the risks get bigger as major powers come into play and a new 'Ouch' bar becomes a concern. Admittedly, a number of stats and details either did not carry over from the last game or hardly had any significant effect at all on this one, however it still serves as a pretty good setup for the third and probably final installment of the series with major decisions cementing your path to heroism. It provides new character stats to further mold your main character's personality and disposition.

Oh, and you get to choose what your mom is like. It's revolutionary I tell you.. Same as the first game you are just a useless powerless loser it is so much fun being unable to do nothing.. I felt like I had no agency in this game. Anything I did felt shoe-horned into the pre-written plot. And when I did do anything that felt like I was going to accomplish something and really make my playthrough feel different and impactful, the game didn't reward me. At the beginning of the game, I was given the options on how I wanted to pursue boosting my "powers". I decided on finding dad's old suit of armor. All game, I get little snippets, getting ever so closer to getting it. Then boom, games done, no armor for you. Like how and why did you have me go through all of those side missions then? So you could give it to me in the sequel? I don't want that. I worked for it in this game, why would it make sense for me to get it in the next one? It just really rubs me the wrong way. Anyway, if you want a light game that won't take you too much time and won't take too much input to complete, this is the game for you. If not, I've heard Just Cause 3 is on sale for $5 right now. Might be the better purchase.

Edit: Further, I really don't like professor Hedonist. In the first game, he came across as kind of a creep. Like he felt like a predator of young students. And he never pays for that because 'he's too good of a super'. Like no. He's a predator. He shouldn't be a teacher. There should be some way to get rid of him. Instead the game tries to paint him in this light of 'oh, but he's a really good super. Look, we can let him not feel guilty about leaving everyone behind to save his friend who will surely die.' Like no. I don't care, you prey on kids you aren't redeemable.
Also, I realized I forgot a perfect example of how this game robs you of choice. Partners. For what felt like every time it came time to become partners with someone for a major project, I had no say. I would always be intercepted, no matter what. I felt like a passenger for so much of this game.. Wow. I just finished the game and I can't believe how good it is. When I played the prequel, I was already hooked to the game and honestly, I thought that this game will not be as good as its prequel but man was I wrong. The events that happens in this game are intense and it feels like you see what your character is seeing even though all you see is text. For a text based game, this one is unlike the other text-based games that are predictable. I definitely recommend this game especially if you have played the prequel. It's not expensive but it delivers more content that an expensive game. If you haven't got it yet, what are you waiting for? Go and experience Community College Hero: Knowledge is Power. My rating is: 9.7/10 because this game is specktacular.. It was great to be able to return to Speck and recontinue the adventures from the first game. The 2nd installment in the Community College Hero offered more gripping choices and exciting scenarios to play through than the first issue. I've only just finished my first run of the game but I am more than eager to pick up the 2nd phase of the adventure from the start once more.

Now I'll have to wait another 2-3 years for the sequel.. I am copying my review to the first one since I played the second game right after the first and have similar opinions of them)

I enjoyed it, only things I dislike about it is that 1. this makes it seem like you can have superpowers, you cannot, you are in fact the only person at the school without powers. Not that that's bad, just different than what I had anticipated.
Secondly, I have noticed that many of the games the author/dev makes are set up for a sequel, not that that's bad, I get it's easier to make a sequel than something new. But I personally find that this means each game does not feel like a proper game. The endings do not feel like proper endings, (they obviously are not since there is a sequel, but still).

Best way I can describe it is that the first game ends before you complete your final exams, you do not finish going to school before the ending. It feels more like a 10 hour game that was chopped up into 3 bits.
Don't get me wrong, every bit of it is very enjoyable on it's own, it's simply that I miss a proper ending. A proper send off, and having to wait for sequels (the zombie exodus games the dev made handled endings better IMO) is just frustrating.


All in all, I still very much enjoyed the game, and recommend it.. Another great tale woven from Eric's endlessly creative mind. This time around, the stakes are higher, the choices are tougher to call and the consequences are bigger than ever before. Your character's powerless plight continues, as they attempt to take down real foes and protect their city. Plus, their personality and motivations can start out pure, and desend into evil, or maybe the opposite! And again, Eric's way of writing just makes each and every scene and character feel like they're really there. And that ending twist, my god that ending twist!

Eric Moser, you have gotten me incredibly hyped for the final installment! Keep creating such marvels!